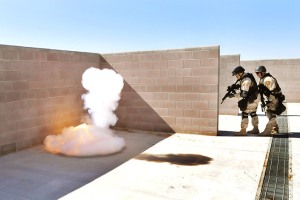 For all u CS fanatics out there, I know what you are thinking after seeing this pic…. “Time to go kill someone”! Oh God, how I’ve been TORTURED with hidden bombs and bots coming from nowhere and shooting…. Ahh, the good old college days! Now enough with the reminiscing… and those of you, who have not already stopped reading this, to go have World War 3 in Cyberspace; may find this article quite intriguing.

All the years I’ve watched boys play with their fancy armor and weapons (and the few years I’ve played with them myself), I have never really imagined that one day any of these hi-funda deathly machines would actually exist in our little world! To my pure shock, I came across an article today titled “10 Sci-Fi Weapons that Actually Exist by Aaron Rowe” (http://www.wired.com/dangerroom/2010/01/sci-fi-weapons/6/). The above picture is one of the examples in that article. Now I’m not going to describe the technicalities of each instrument because Mr. Rowe has done a pretty good job at that. Hats off to him for his detailed explanation. However what really disturbed me was the fact that what was going on in our videogames was now creeping into reality. I’m sure all of us have seen umpteen shows and news tidbits on TV about how a videogame has had an adverse effect on a child trying to imitate the same thing in real life… but have any of us heard or really paid attention to the way cyborgs and their toys were affecting our big boys of the world? Apparently it’s a much bigger cause to worry about.

Don’t get me wrong here… I feel sorry for the kids who try to achieve impossible feats or for other kids traumatized by one who decides to bring a gun to school… but is our world ready for an entire nation or continent making a “flash bang grenade” or a “laser avenger”. These weapons are no longer in our comic books or video/computer games… they are at war – in use. There are no bots controlling them or dying with them – there are real people. Maybe they are terrorists, maybe they are civilians, maybe they are battling for peace, maybe they are children – maybe its your brother, your neighbor, the kid in your class you always secretly admired even though he stole your first place by one mark or the school’s biggest bully… Whoever it is, does it matter?! Does anyone deserve to die this way?

We say we are fighting for world peace – in what way, I ask? By building bigger, better machinery? Each nation is racing to “protect” itself and the politicians can get away with murder now by just using the right words! But the truth remains, it is from us that they get the strength to fight – the intelligence to build state-of-the-art weaponry. We fight and sue videogame developers for developing such games and selling them to the public… who sues the government (of whichever country) for making such machinery? Who sues the developers of these tangible murderers? Do we even know who they are?

At the end of the day, the story remains the same. Boys will be boys and they will always want to build bigger, badder toys to play with – The more destruction their toy causes the more of “a man” they r. But boys, look around you – your playmates are dwindling! We all know, it’s no fun playing with bots!