Statuary Warning: The above title is a good insight on what the rest of the article is going to be. If you take offense easily, I suggest you leave now. It’s going to be an insult to the ignorant and the stupid.

*Disclaimer: ‘Stupid’ here refers to people with an attitude problem

Well, as I was skimming through my Twitter timeline this afternoon, I came across a very interesting ‘difference definition’. “The intrinsic difference between ignorance and stupidity is that ignorance simply implies lack of awareness about something, while stupidity denotes the inability of a person to understand something due to insufficient intelligence, thus leading to the misinterpretation of a fact.” (Referral link: http://www.differencebetween.net/language/difference-between-ignorance-and-stupidity/) This got me thinking – how many truly “stupid” people do I know? Are they really that stupid? Or are they ignorant? Or are they just feigning ignorance? Now why would anyone do the latter beats me…. But hey! I’m not here to judge! If you feel that you’re too smart for your own good and you have to (N I mean absolutely have to) make yourself look stupider…. Well that’s your call! But stop and think…. How many people have you met that you know for a fact are genuinely ignorant and stupid? N did being stupid get them anywhere?

Easy test….. go through your FB list…. You’re bound to find such idiots there! Well I’ve found quite a few stupid, ignorant people! I know I’ve just pointed out a major difference between the stupid and the ignorant… but I’m compelled to combine the two. The fact of the matter remains that the stupid are not willing to change their idiotic thinking – hence unable to come out of that ‘ignorant’ mould. It’s all just a vicious cycle – can you blame the stupid? It’s an in-built feature, or maybe an add-on (according to them)!

The thing with stupid people is no matter how intelligent you are, you can’t impart any knowledge to them. You’d rather tear your hair out and bang your head against a brick wall than argue logic with them. A logical, heated discussion would require sensible thinkers…. If you decide to argue with a “Homer Simpson”, you’re going to wanna use that nuclear plant to blow the bugger from here to Andromeda probably! (Or transport yourself there…. Depending on the number of “Homers” you’re arguing with!) 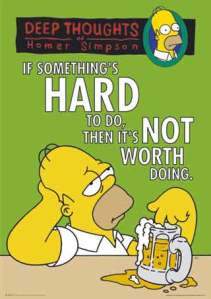 I feel sorry for the stupid sometimes… They are always under mistaken impressions… “I’m the best thing that could ever happen to you”, “I’m your only option”, “I’m the only one that can help you” and most importantly “You’ll never be as good as me!” Did it ever occur to you that… that’s exactly what we’re trying to do?? We work hard everyday, slave our asses off, just to make sure that we don’t excel in stupidity like you do! We, the sane race, try our best not to reach the levels of inanity attained by you!

I admire the stupid…. for the same reason! A stupid person can go through his/her entire life thinking that the functioning of the whole universe is based on his/her mere existence! I guess their slogans in life would be movies like “Back to the Future”! Michael J. Fox, as much as I love you(and that movie), I wouldn’t base my life on a movie or character like that…. No offense meant whatsoever!

I envy the stupid…. again for the same reason! They don’t have a care in the world! The universe is available to look after all their frivolous needs. Of course when the universe doesn’t (as is in most cases), they are still under the impression that their needs have been fulfilled – Unfortunately, the universe doesn’t recognize their needs as NEEDS! How can it when the stupid are living in a world of fantasy? So they don’t even realize that the gratification process has not come about.

To those who want to banter about my point of view here, I say “STOP! STOP PRETENDING TO BE STUPID AND IGNORANT! You aren’t going to gain anything”. I say it with confidence, cos for the truly stupid, this article is an achievement because it acknowledges their expertise! It’s in their favor and praising them to the skies. They will have no issue with it… THAT is the confidence I have in their intelligence!